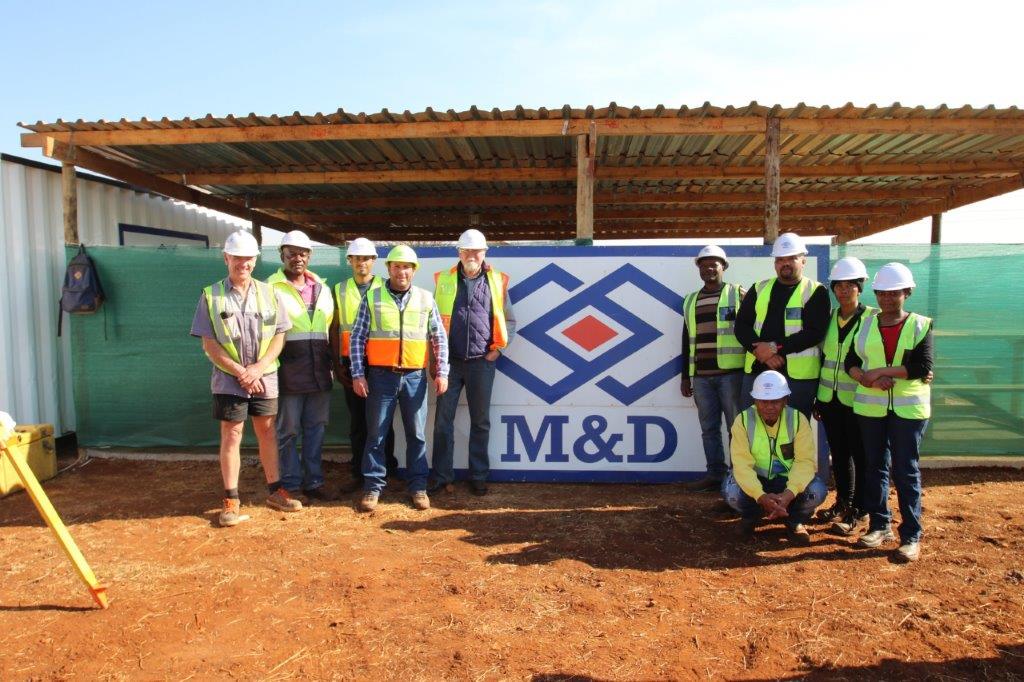 M&D Construction Group, a leading South African building and civil-engineering construction contractor, has commenced work on a large development that will provide affordable housing to many low income earners and tenants in Vosloorus, Gauteng.

Importantly, this project aims to deliver an integrated sustainable development that also caters to the social, economic and infrastructural needs of residents of this large township by assimilating the development into the larger surrounding economies of Alberton, Boksburg and Germiston civic and transport core.

Known as the “Katlehong-Tokoza-Vosloorus Complex”, the development is located south of the N3 Freeway and Barry Marais Road on an 11 ha parcel of land on Erf 18383 that is owned by the Ekurhuleni Metropolitan Municipality (EMM).

M&D Construction Group has been appointed by the EMM and the Development Bank of Southern Africa, which is the project facilitator, to build the eight 10 storey social-housing blocks in the complex.

They will provide a total of 320 bachelor and 450 two-bedroom units to residents of Vosloorus Extension 9 and Ward 45.

This living space will be complemented by the 18 four-storey high reconstruction and development programme (RDP) blocks that will be built on the adjacent stand to provide an additional 582 twin bedroom units for residents of Little Maseru and Vlakplaas.

Both will be handed over to the EMM at the same time to accommodate more than 4 500 people, and Pierre Louw, senior contracts manager of M&D Construction Group, is confident that the company will be able to complete its component of the project by mid-2020.

“Challenges abound in both the first and second phases of the construction programme, and successfully overcoming them to complete the project by this deadline will rely extensively on sound upfront planning. Certainly, M&D Construction Group’s long and solid track record in both the fields of civil infrastructure and building places us in very good stead on this project,” Louw says.

As part of the initial phase of the project, the group’s Roads and Earthworks Division has also been tasked with significantly upgrading existing services in the area to accommodate this large development.

This aspect of the work scope includes the water reticulation and sewer systems, as well as all associated connections; storm-water infrastructure; and electrical reticulation to surface bed level and the substation.

Moreover, the division has been entrusted with upgrading the road network to accommodate additional traffic in-and-around the complex once the development has been completed.

The Roads and Earthworks Division mobilised to site earlier this year to commence with the earthworks, including completing the three metre-deep excavations for the structures’ “super bases”. These large raft foundations will each consist of as much as 1 500 m3 of concrete.

Remi De Meyer, site agent at M&D Construction Group, says, initially, the buildings were to be founded on piles; however, further investigations of the ground conditions revealed that the site was overlain by dolomitic boulders, and that the “super bases” would be the most suitable foundation option.

The contractor has also suggested that the blasted boulders be crushed on site to produce a fill material for general layer works.

Dinesh Rampersad, M&D Construction Group’s Roads & Earthworks site agent, says that crushing the rock on site and reusing it will reduce the carbon footprint of construction activities, and this is in line with government’s focus on sustainable infrastructure.

Meanwhile, a commercial farmer in the immediate vicinity has also expressed interest in taking some of the rock to enhance his property.

An immediate priority is to work closely with the relevant authorities to ensure the timely delivery of water and electricity supplies to site so that the works programme can continue unhindered.

Some of the many implementation stakeholders for this project include the EMM’s Human Settlement, City Planning, Building Control, Water and Sanitation, Roads and Stormwater, Energy and Metro Parks departments.

Careful planning will also be required in the positioning of the four tower cranes on site, considering the close proximity of the social housing blocks to Eskom’s overhead electricity transmission lines.

There is also just enough space for the crane laydown area, so building material deliveries will have to be tightly coordinated on almost a just-in-time basis.

Noticeably, this is the first time that social housing developments in the country will exceed the conventional four-storey limit as part of this ambitious affordable housing project.

“Each structure comprises a concrete frame with a brick infill, as well as off-shutter soffits, and feature one lift shaft and two stairwells that will also serve as fire escapes,” Louw says.

“While a relatively straight forward design, quality control is essential right from the outset, considering the sheer extent of the building operations. One simply cannot afford to have many snag items per unit on this project, so absolute accuracy is required as the buildings starts climbing from foundation level.”

M&D Construction Group has also committed to meeting and even exceeding the high social requirements on this contract, and has already started working closely with some of the 16 small-medium and micro enterprises that will eventually participate in both phases of the work scope.

As part of the group’s own social development programme, a specialist consultant has also been appointed to provide both theoretical and practical training to the many members of the community who will be employed to work on this typical Expanded Public Works Programme project.

They will be tasked with the less-onerous aspects of the works programme. These include steel fixing and shuttering, as well as painting and tiling, while M&D Construction Group’s Building Division will retain direct control over the specialist trades during the building phase.

“It is one of a number of substantial housing developments that the municipality intends implementing over the next five years. It is also in line with South African president, Cyril Ramaphosa’s, own pledge to address the severe housing backlog in the country. This is a significant challenge considering that there is a shortage of about 600 000 units in Gauteng, alone, and the dire situation is being compounded by increasing urbanisation. M&D Construction Group looks forward to nurturing a longstanding partnership with government to assist in implementing workable solutions,” Raghubir concludes.