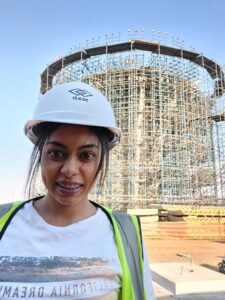 As South Africa observes women’s month, Murray & Dickson Construction (M&D) reflects on its recognition of women in the workplace. Khula Nathi, isiZulu for Grow with Us, is one of the company’s values that encompasses the focus M&D places on employee development. Rooksaar Singh is a great example of an employee who continues to grow with M&D. She is a 28-year-old Civil Engineer who is part of the M&D team that is building a reservoir in Masetjaba near Duduza Township in the East Rand.

Rooksaar was born, raised and schooled in Ladysmith, KwaZulu-Natal. She matriculated in 2010 and took a “gap year” afterwards. Unlike many young people who take a short break after completing their schooling to first contemplate what they really want to do with their lives, Rooksaar’s “gap year” was intended to help her parents first gain the financial growth they needed to fund her studies. Her story is that of someone with humble beginnings.

“I studied Civil Engineering because I am fascinated by the physical growth of a structure. I love watching things grow. While civil engineering is also about designing, I’ve always wanted to be on site building things,” Rooksaar says. She fondly recalls her first civil engineering project. “I was about 12 years of age when one day my younger brother and I decided to build a swimming pool at home while our parents were at work. It was a disaster, and they were certainly not impressed when they saw the mess that we had created in the backyard.”

She graduated with a National Diploma in Civil Engineering in 2017 and then accepted an in-service training opportunity at Johannesburg Roads Agency. While she expected to work with roads, Rooksaar was placed in the Stormwater department. This is where she first discovered her passion for water and decided to enrol for a B.Tech in Water after completing her in-service training. After completing her B.Tech degree, Rooksaar accepted an opportunity to work for M&D in 2019. At the interview, CEO, Rukesh Raghubir, suggested that Rooksaar would be more suited to work on site as a contractor than as an office consultant. He gave her a chance to work as his personal assistant for a few months to gain experience before an opportunity arose for her to be transferred to site. Rooksaar gladly accepted the opportunity because she believes in capitalising on available resources to learn as this helps in unlocking opportunities in the future. She says that she learnt a lot about the business of M&D while working at the CEO’s office. She gained an understanding of what the company did, what tenders were on the table and what processes were being followed.

Rooksaar also attributes much of her success to her mentor on site, Juan Venter. “I am so grateful that he is my supervisor. He helped develop me into the person I am today and grounded me. Juan told me that I needed to shift my mindset. He reminded me that I had to learn to stand my ground, but also to never bear grudges if I wanted to be successful in the contracting environment. Juan also told me that I needed to believe that things would work and always apply my mind to finding solutions. Importantly, he has never spoon fed me. Juan wants and encourages me to conduct research on my own,” she says.

Asked what message she would give to her younger self, she said “power is nothing without control.” Rooksaar’s motto in life is “never stop believing in yourself. Always take the opportunity to shine and run with it.” She says that she is grateful for being a product of M&D’s Khula Nathi. “I am thankful to M&D for giving me the platform to showcase what I can do. We grow with each other here. I have progressed from personal assistant to Quality Control Engineer. I proceeded to Junior Civil Engineer before being promoted to Civil Engineer in May 2021.”