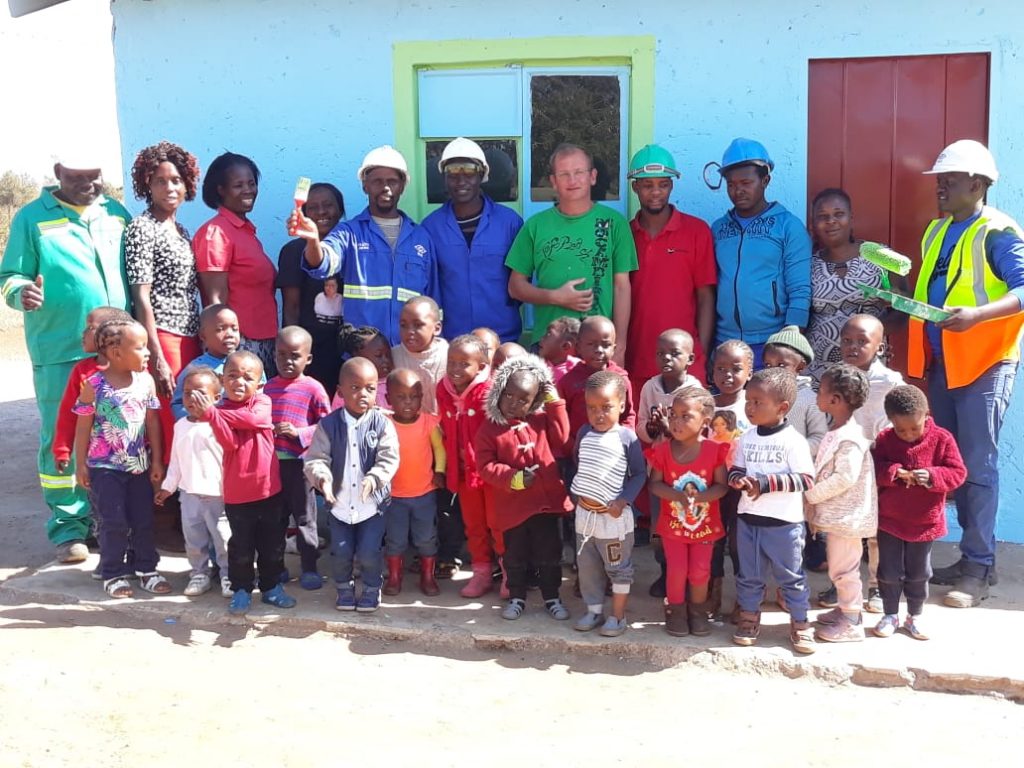 M&D Construction Group teams working across more than 20 construction sites in the country proudly rolled up their sleeves to make a significant difference to the lives of many disadvantaged South Africans this Nelson Mandela Day.

Some of their projects were completed just before the 18th of July and others on Nelson Mandela Day. These are being complemented by more ambitious undertakings that continued throughout July and will be finalised during August.

“We decided to take a totally different approach this year by allowing our construction teams, which are closer to the ground and interact with members of the communities they are working in on a regular basis, to drive the process. I am convinced that we made the correct decision considering the overwhelmingly positive response that we received from the various team leaders and the excellent suggestions made by their staff to uplift these communities,” Yolanda Sedibe, Human Resources Director of M&D Construction Group, says.

On Nelson Mandela Day, the M&D Team WhatsApp group was abuzz with updates as representatives of the teams in various provinces handed over their projects to community members.

These included many photographs of the impressive repairs undertaken at a crèche in Thohoyandou, Limpopo, by the company’s team stationed at a construction site in Mulenzhe. Working to a very tight deadline, the day-care centre was completely re-plastered and painted in time for Nelson Mandela Day.

This initiative was complemented by the extensive upgrades undertaken to Lumaudeni Day Care by the team of contractors working on a project in Meje, Eastern Cape. The upgrades included maintaining the playgrounds; repairing the access road, entrance door and toilet roofs; as well as constructing an earth berm around the kitchen area.

Meanwhile, M&D Construction Group employees working on a construction project in Pofadder, Eastern Cape, undertook urgent repairs and maintenance to a children’s home in the vicinity, while also donating more than enough blankets for its many orphans.

In the Western Cape, employees stationed in Langerug mobilised to clean streets serving a nearby community. It was an extensive undertaking, with staff starting at Cillier Street and gradually making their way to the end of Hugu Naude Avenue, via Hugo Naude Avenue.

Moreover, the team working on a project in Vryburg, North West, helped remove an illegal dump site in Huhudi to the relief of members of this community.

These initiatives are complemented by the significant contribution made by the group’s teams stationed in Gauteng.

For example, the company’s employees working on a construction site in Troyeville cleaned David Webster Park where many young children regularly play. Notably, all of the company’s sub-contractors participated in the initiative in a true spirit of Khula Nathi.

Workers stationed at a project in Joscho cleaned and painted a facility in Dobsonville that provides specialist care to elderly people living with HIV/Aids, while employees at M&D Construction Group’s plant yard in Kya Sands cleaned and repaved a nearby clinic.

In KwaZulu-Natal, the company’s employees working on a project in Nungwane prepared lunch for more than 100 children at a nearby preschool.

Rukesh Raghubir, CEO of M&D Construction Group, says that he is very proud of the significant effort made by his team to make a difference to the lives of many South Africans.

“Nelson Mandela Day is an important event in the country’s calendar when all South Africans endeavour to emulate this international leader by making a real difference to the lives of South Africans. These initiatives, combined with our other corporate-social investment projects, have also demonstrated that it is possible for the country to make every day a Nelson Mandela Day,” Raghubir concludes.